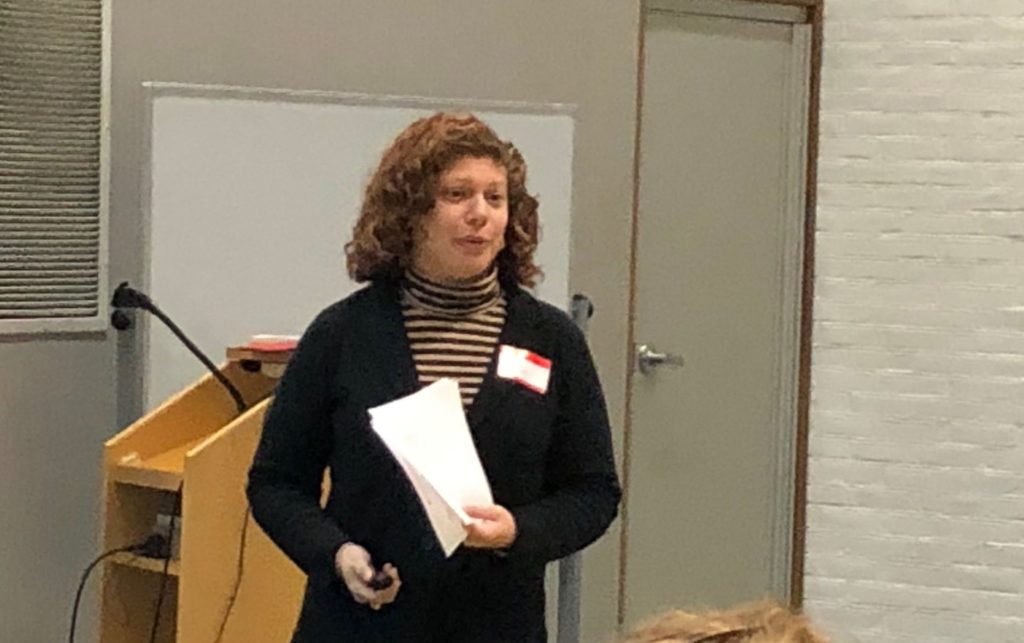 That, said the speaker at an end-of-year meeting of the Maryland EFA chapter, was a question she’s heard for years now.

The speaker was Ally Machate, who’s been a great EFA-er for quite a while. She went from being an editorial intern (essentially a “Girl Friday”) at a small indie publisher years ago to eventually running her own biz in the Baltimore area, known as The Writer’s Ally. Machate’s presentation was held on December 19 at a Howard County Public Library, an event organized by Maryland co-chair Barbie Halaby and attended by eight other members and potential members.

Meet ALL the Editors

The word “editor” is often too generic a term, Machate told us. That’s why she defined the different types of editorial roles and urged us not only to understand these differences but also to spread the word…to fellow EFA members, current clients, and perhaps especially potential clients. “Many authors don’t know there are different kinds of editors,” Machate noted, adding, “Distinguishing makes you stand out.”

We need to better educate authors who lump all the skills together. We also need to fight a 21st-century designation: content editors. As a designation, “It’s B.S.,” Machate said. (Note: That’s an abbreviation added by this author.) “It may once have had a more specific meaning, but these days it’s too broad a term to be useful. If you’re editing content, then you are a content editor.” Instead, Machate advised, you should get clear about the type of editing you offer so you can be clear with your clients on what they should expect.

This is not a ghostwriter, Machate stressed. It’s more of an overseer of “raw content.”

“You may receive transcripts, notes, or even a complete but very rough draft,” she said, adding, “A book doctor will do whatever is necessary to ‘fix’ your manuscript, rather than simply showing you how to fix it yourself. It can often include some ghostwriting for new bits, too. Book doctors basically take your draft and make it work.”

“This is the most commonly known editorial service, as it’s what most writers think of when they think of working with an editor,” Machate told us. “In a fiction work, it might be providing the author feedback on character development. In non-fiction it could be insights on better structure and organization.” (Though of course the latter applies to both.) In non-fiction, for example, there might be a “prescriptive” element; e.g., an exercise chart the editor will tell the author has to be better developed graphically or explained better in the content.

Compared to book doctoring and in most commercial projects, “developmental editing is [when] the author is responsible for the heavy lifting,” Machate said. In the academic world, “it’s more common for developmental editors to get involved at the start of a book and help guide its development from concept to draft as well.”

She noted the designation “Substantive” isn’t used much anymore in the commercial realm and most authors don’t know it compared to “developmental.” However, when it is used, it typically refers to something a little more intensive than developmental work. The substantive editor is usually identifying problems but also doing some of the heavy lifting with some line editing or rewriting and even reorganization. This can easily slide into the Book Doctoring realm so one should be careful and charge accordingly.

Whatever the designation, “It’s [the person] giving the author direction on what’s needed to get the work ‘publishing ready at a big picture level,’” Machate said.

“With copyediting, work will receive a good polish but the author shouldn’t count on getting a lot of insight as to what’s working (or not working) story- or concept-wise,” said Machate. “These are the folks for whom PUGS exist; specifically they’re checking Punctuation, Usage, Grammar and Spelling.”

Line editing offers a bit more. “I feel that line editing is like an upgraded copyedit, in other words it includes everything a CE includes AND also light-to- moderate rewriting.” said Machate.

She notes: “If a draft needs so much help on the basic writing or line level that a copyedit would be grossly insufficient, to me that signals that you’re entering Substantive or maybe even Book Doctoring territory.”

Some EFA members still remember when we got “proof sheets” from the print house, which were often called “blues.” Maybe now they’re delivered via Adobe but the bottom line is this: the proofreader is reviewing “what your designed pages will look like inside the final printed book. Sometimes a proof will be an emailed attachment of PDFs, sometimes a paper draft printed out from PDFs,” said Machate.

“A proofreader examines a proof for inconsistencies or errors that were missed in the copyediting/line editing phase, plus any remaining typographical or layout issues,” she said. Among issues proofreaders catch: “Wrong typeface, incorrect formatting of different headers, incorrectly aligned margins, a missing copyright page and page numbers are off, ” to name just a few, Machate pointed out.

At her company, they may fiddle with a few corrections at this stage for free, but not major changes. “We have a ‘fee for change’ indication in contracts. It’s something like $30 per change if it goes beyond a certain level of changes requested,” said Machate. This is to discourage authors from rewrites at this late stage that would result in the need to reflow the entire manuscript.

There are other titles Machate brought up (“Book Coaching” and “Book Shepherd”) and she also offered many other details, but to keep things newsletter short we’ll just add a few other pointers here.

First, during Q&A not only Machate but the attendees as well noted that there are great classes for learning more about copyediting, line editing and proofreading. Of course you should keep checking the EFA’s Education Catalog, but also ask around. I remember having to lecture on web development at the Council of Science Editors, one of many places to learn from specialized colleagues.

Second, Machate admitted that it’s harder to find resources to help you decide if developmental editing is a career–or a career segue–one could make. In addition to the EFA’s catalog of programs which boasts more developmental editing courses these days, one resource she suggested was Copyediting.com, which has courses on much more than copyediting. Another suggestion was this book: Developmental Editing: A Handbook for Freelancers, Authors and Publishers, by Scott Norton. (I just saw it online and I will note it’s almost 10 years old.) The EFA held this class in February of 2018. Maybe we need to bring it back!

Most of all, I urge everyone to join the EFA’s Discussion List. Even before you begin contributing, you can glean great advice on challenges others have faced, how they’ve overcome such challenges, what it takes to work in a specific field, pay rates and much more. ###

Wendy J. Meyeroff has been an EFA member for most of her 20+ years in health communications, which includes ghosting, B2B and B2C materials, custom web content and this year, developmental editing. Based in the Baltimore-DC area, she’s served clients across the U.S. and beyond. Her main site is for WM Medical Communications.
[Revised version published 5/14/19]