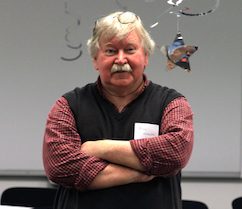 After eight years as an EFA co-executive, Bill Keenan has stepped down. His steady leadership was instrumental in getting the EFA on sound financial footing and keeping us there through a long period of growth.

Susannah Driver-Barstow, the EFA’s outgoing general manager, who worked alongside Bill during his tenure, says, “Bill helped us make important connections to effectively run the organization as we grew and changed, and his generosity toward the EFA and the people in it has been remarkable.”

Bill joined the EFA in 2004 and the Board as a member at large in 2006. In 2007, he co-chaired the Membership committee with Joanne Starer until he stepped down in 2009. In 2012, he rejoined the Board as a member at large, and in 2013, at the request of Margaret Moser, he ran for her position as co-executive and was elected. During his first three years as co-executive, he served with J. P. Partland, who was a great help in teaching him the ropes of that role.

The co-executives chair the EFA’s monthly Board of Governors meetings, keep track of the activities of various groups and committees, develop an annual budget, sign checks, and work with the office staff to make sure operations run smoothly. The co-execs have also been involved in helping to organize our recent conferences in New York and Chicago, as well as the 2022 conference in Alexandria, Virginia.

“I’ve appreciated Bill’s willingness to explore new projects and directions for the EFA,” says Christina Frey, with whom he’s served as co-exec for the past three years.

Karen Wallace, the EFA’s outgoing website chair, says, “Bill is always supportive and encouraging of other Board members. He kept meetings and discussions on track with calm, knowledgeable direction and a sense of humor.”

The EFA is much bigger now than when Bill first joined. Back then the membership was largely based in the New York City metro area and classes and gatherings took place in the EFA office. Now membership is over 3,000.

As for the challenges the EFA faces, Bill recognizes the importance of fostering inclusion and a diversity of members, and also in continuing to meet the needs of both new and long-time members. In his time as co-executive, he focused on helping members build connections with other members, with potential clients, and with resources. “Anything we can do to help build connections,” he says.

Bill is essentially retired from freelancing. His specialty was business writing and trade publications. He worked for the Paper Trade Journal and the newsletter publisher Research Institute of America; for Sales & Marketing Management magazine; as editor in chief for Selling magazine; and as editorial director for newsletter publisher Alexander Communications Group. Bill transitioned to freelance during the contraction of many print outlets in the wake of the internet era.

He is the author of three books: Human Resources: A Guide for Management; Commissions, Bonuses, and Beyond: A Guide to Sales Compensation; and The Sardine Factory: An Insider’s Look at the Famed Restaurant and Its Cuisine.

With his extra free time now, Bill is thinking about writing a novel or collecting his poems for publication. He and his wife, Karen, are eager to travel and see more of their family, including their three-year-old granddaughter.

He will continue to volunteer outside of the EFA writing a quarterly newsletter for the Friends of Delaware Water Gap National Recreation Area.

“Bill has generously given his energy, time, and talent to serve this organization,” says Ruth Mullen, who will succeed him as co-executive. “He is a problem-solver, with a no-drama approach that has served our diverse board well. In addition to his co-exec responsibilities, Bill is a rock-steady volunteer. I will miss his friendly face!”