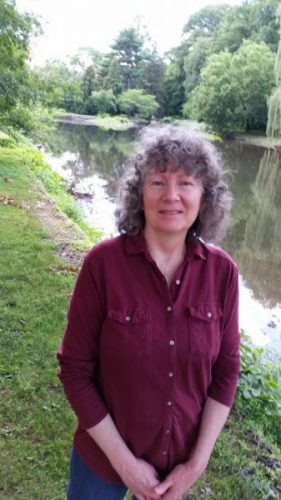 When Karen Wallace started working toward a PhD in linguistics twenty-five years ago, she neither expected it to lead to an interest in computer programming nor could have anticipated overseeing the EFA’s website redesign. She didn’t plan to become an editor, either—freelance or otherwise. As is often the case, circumstance and opportunity led to an unexpected professional path after Karen entered New York University’s doctoral program, having earned an undergraduate degree in political science and Spanish.

“I worked for a native Japanese speaker in the NYU speech lab, and her technical papers needed editing,” recalled Karen recently. “I became the editor for all of her publications, and then for other non-native-English speakers in the department, too.” Meanwhile, as part of her research assistantship, she learned C programming and programmed the lab’s software.

After graduation, Karen took time off to start a family in Nutley, New Jersey, about a 30-minute drive from New York City. When she returned to the workforce eight years later, she found freelance editing and writing jobs easier to come by than linguistic work. Karen also started learning web design. “I started a local nonprofit, and we couldn’t afford to pay anyone to do our website, so I took classes in HTML, CSS, and PHP. I loved it!” she said. “There’s this rush you get when it works—you forget all those hours you just spent banging your head against the wall.”

Karen joined the EFA in 2009, taking editing courses to sharpen her skills and enjoying the opportunities to network. When the EFA posted an announcement seeking a new Website committee chair in 2012, Karen contacted then-co-exec J. P. Partland to discuss the position. They talked by phone, and by the time they hung up, the role was hers.

At the time, the EFA website had one programmer and multiple technical issues. Plus, it was “old fashioned…very turn-of-the-millennium,” said Karen. “A lot of work had gone into it, but aside from being old-style, the site’s organization was bad. It was hard to find things and very wordy.”

A month or two after Karen became the Website chair, the programmer left for a full-time job, and the EFA hired a new part-time programmer, Jay Pennington. Karen, Jay, and EFA then-General Manager Susannah Driver-Barstow developed the old website as best they could, but eventually everyone involved recognized that an overhaul was essential.

Karen began working primarily with Susannah and EFA board member Robin Martin to formulate a web redesign plan. By late 2013 proposals began arriving, though Karen recalls that the initial budget was too low to generate much bidding interest—and they weren’t able to retain “pure PHP” programming because of the prohibitive cost. “People were jumping on WordPress or Drupal at the time, basically using open-source content management systems to create a website,” she said. “We knew the cost of a from-scratch website was outside our budget, so we chose that route, too.”

The EFA eventually hired web development company Affari to work on the WordPress redesign. The small team of Karen, Susannah, and Robin worked primarily with Affari designer Daman Stancill to fix everything from the old website that didn’t work well. They put much thought into the directory, deciding how much detail to offer and which of the possible categories to include. They also had to closely monitor the programming process. “Affari’s people, led by Daman, were great in many ways—their web skills and intuitions were spot on, and they worked really hard,” said Karen. “Still, we really had to stay on top of the functionality. There was a lot of checking and testing before launching.”

The EFA website, launched in September 2017, is vastly improved from its former state, with far fewer complaints or requests for new categories. (Pre-Affari programmer Jay continues to help with the website periodically.) “Without Karen’s technical skills, ability to shepherd complex projects and solve problems, and immense generosity with her time, the EFA would not have a website that so smoothly accomplishes so many things for members and the public across so many EFA programs,” said Susannah.

Karen noted there is still room for improvement, however. “Reporting has always been a challenge,” she said. “WordPress isn’t designed for data management, and while there are plugins for running reports, they are slow and don’t work well.” Another area for improvement she cited is accessibility, which wasn’t as much of a priority in years past as it now, and “rightly so.”

“Karen didn’t love WordPress and had some hesitations about how robust it would be and whether it could handle all of the functionality required for the EFA site,” recalled Robin. “Ultimately, she was right in a lot of ways, and I don’t think she’s had a single week without troubleshooting since! But Karen never said ‘I told you so,’ or ‘I quit.’ She’s been in a highly stressful volunteer role with a relentless workload for a long time and has done a marvelous job.”

Over the last couple of years, Karen has found it increasingly difficult to balance paid freelance work, EFA volunteer work, and family time. She also thinks the timing is right for a transition, given the website’s overall success and the state of the EFA. “The EFA is moving in new directions, with a lot of changes—good changes—in the organization,” she said. “With everything going on, I’m finding keeping up a bit challenging. I also strongly believe that fresh eyes and new blood are a good thing for any organization.”

Karen will remain a committed EFA member after gradually stepping down from her position over the summer, helping new Website chair Wendy Meyeroff as needed. Karen will devote some of her newly freed-up time to her passions: spinning, knitting, and weaving (she is a fiber artist) and Latin dancing (she has taken salsa classes with a friend for years). She’ll also have more time to spend with her husband and two sons, now 23 and 26. And she’ll reconnect with her local Nutley community. “I’ve had to say no to a lot of local volunteer opportunities over the past nine years,” she said. “It’s time to revive my community connection.”

“It was a great pleasure and my privilege to get to know Karen,” said Susannah, who retired this summer. “While I hope she will now enjoy some extremely well-deserved new-found time, I will also very much miss working with her.”

Karen may be moving on, but the EFA community will be benefitting from her hard work and dedication for years to come.