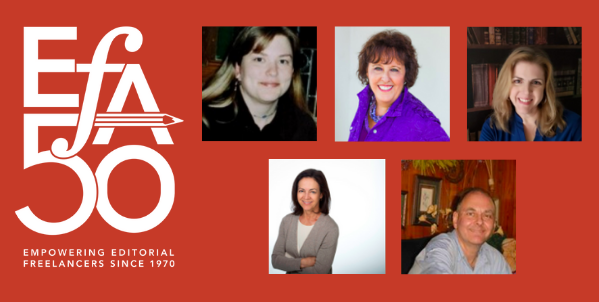 Along with the reelection of Co-executive Christina Frey, Treasurer Joy Drohan, and others in EFA’s annual election in June of this year, five new members at large were also elected to the EFA Board of Governors. They include Nanette Day, Adrienne Moch, Heather Pendley, Amy Spungen, and David Stacks.

Let me introduce you to them:

Nanette Day is an author, a former ESL teacher, a former Peace Corps volunteer, and a small business owner. Day has always been passionate about the written word, and since 2002, she has been able to “turn that passion into my life’s work.” As an EFA member, she says, “I have learned that the world of editorial freelancing is vast and diverse, and she adds, “I enjoy the organization’s open, supportive discussions that give me insights into how others are thriving in their careers.” As an EFA member at large, she says, “I would support members in overcoming challenges in their freelancing, as well as sharing their insights and successes.”

Adrienne Moch has been a freelance writer/editor since 2004 and uses “the skills I developed as a journalist, corporate communicator, newsletter writer, and PR professional to assist clients with their writing and editing needs.” And she adds, “My focus is ensuring clients’ written materials aren’t just competent—but compelling.” And as a member at large, Moch has already jumped in to help. She is now contributing to the EFA Membership Committee to help look for discounts and other resources we can offer as benefits to the EFA membership. And to join her in that effort, she gets personal support from “my assistant/support system—a rescue dog named ‘Cubbie.’”

Heather Pendley is a freelance copyeditor, proofreader, and writer of back-of-the-book and embedded indexes. She owns Pendley’s Pro Editing & Indexing and lives in Southern California. Heather was recently a judge of the ACES 2020 Headline Contest and is an editorial board member of the American Society of Indexers’ journal Key Words. She has been an EFA member since 2017, and says she is “eager to contribute to EFA’s success as a member at large.” In fact, she is already helping out by editing some of the scripts for EFA’s upcoming 50th anniversary videos.

Amy Spungen has been an in-house journalist in Washington, DC, and Chicago, and more recently she worked as editorial director for the Chicago Botanic Garden. Now returned to freelancing, Amy continues to write and edit for various institutions, though her passion is editing indie fiction and memoirs. An EFA member since 2016, Amy reports that “the EFA has been a great resource for me, and I hope to give back to the organization through service on its Board of Governors as a member at large.” And in fact, she is already contributing. She has been working closely with Robin Martin and the Publications committee by proofreading some of our upcoming EFA booklets and helping set up the new EFA bookstore, and she is helping Molly McCowan copyedit the EFA Resource List. She also published an article recently on aging and freelancing in Tracking Changes, the ACES journal. The title is “Hey Boomer! Still Snagging Gigs?” Give it a read, even if you are not a Boomer.

David Stacks is a senior editor, consultant, and founder of Stacks Editing, which specializes in doctoral and masters dissertations for educators, memoirs, fiction, including historical novels, and indexing. Stacks Editing also does book pagination and design as well as cover design. Stacks lives in Augusta, GA, where he is active in the Authors Club of Augusta, and he has also been active in the Society of Professional Journalists, the American Society of News Editors, and other professional groups. And he has already jumped in to help as a member of the EFA and as a new MAL. Stacks is helping with EFA’s chapter development effort by working to start or restart chapters in Florida, North Carolina, and Montana. He is also working on an EFA advertising project with long-time EFA board member Sheila Buff.

The EFA has always counted on the efforts of members and Board members to help make the organization bigger and stronger. And this year’s contingent of new MALs is already jumping in to contribute to that effort in a variety of ways. We should all look forward to getting to know them better—and working with them where we can—as we move forward as an organization, and as a vital resource to our members.