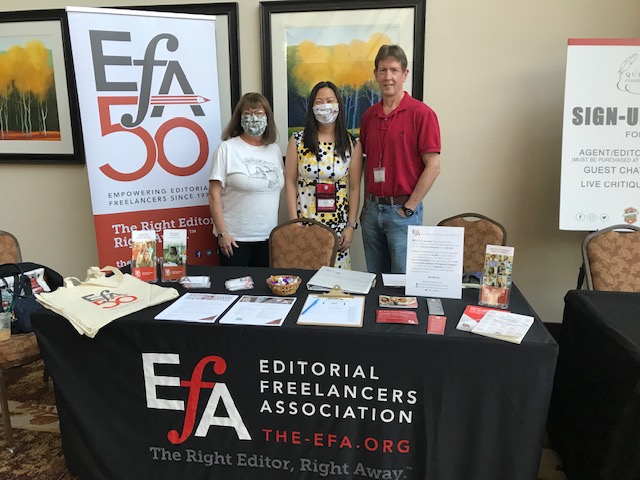 As a longtime writer and editor, it isn’t every day someone walks up to me and says, “How do I hire you?” But that’s the kind of question you’ll get when you volunteer at the Editorial Freelancers Association table at a writers’ event.

My first volunteer experience with EFA was at the 2021 Quills Conference in August, an annual four-day series of writing workshops organized by the League of Utah Writers. After months of pandemic solitude, so starved was I for writerly companionship and creative motivation that I drove the 340 miles from Boise, Idaho, to Salt Lake City when EFA put out the call for volunteers.

Even before I arrived, I knew what was expected of me. Each person selects the dates and shifts they’d like to work and receives the schedule on a handy spreadsheet that includes the contact info for all the other volunteers.

While I wasn’t on the crew that set up the EFA display, I had a chance to look at the printed instructions and was impressed – even I could have managed it! The EFA sends everything needed for a sharp-looking display, from a standing banner and EFA-branded swag – microfiber screen-cleaning cloths and tote bags – to a basket of candy.

We had plenty of brochures and handouts. I also emphasized the range of job opportunities available to members on the EFA Job List. Of all the facets of EFA, I think the Job List and Member Directory listings piqued the most curiosity.

About half the people who sauntered up to the booth said they were writers; the rest were editors or publishers.

“Some of my authors really need this,” said a woman who described herself as an authors’ coach as she scooped up brochures. A publisher told us he needs “better covers” for his books, “and some help with manuscripts.” A hotel guest who happened to notice our display stopped by to outline her idea for a memoir. In … great … detail. (That one will need an editor, for sure.)

We chatted with more than a few attendees about their book ideas. A big part of the Quills Conference is pairing authors with publishers to make book pitches, for which the writers sign up and submit sample chapters in advance.

It surprised me that so many said they’d never heard of the Editorial Freelancers Association, but it didn’t take long to fine-tune our pitch. When they asked about the cost, we told them the membership fee “works out to be about $12 a month,” and noted we’ve more than recouped our own annual investments through the jobs we’ve gotten. We touted the variety of online courses and publications, and the local EFA chapters in some cities. We bragged about the national EFA get-togethers, like the one I attended in Chicago in 2019.

Of course, there were slow stretches at the table, when people were in workshops or book pitches. That’s when we volunteers got to know about each other’s work and lives. It was so much fun to meet and talk with Kristy Gilbert, Ted Olson, Annie Oortman and Crystal Shelley (volunteer Martha Rasmussen also helped with the closing shift, along with her husband and son) – and, as Annie put it, “We all need to stay in touch!” I hope we do.

As the COVID delta variant surges through Utah (and other states), we had to show proof of vaccination to register at the Quills Conference. The hotel required masks in all public areas, but did nothing to enforce the policy, which seemed to be quickly ignored by most folks after day one. It was frustrating to get into a crowded elevator and feel like I was the only one playing by the rules.

However, that’s a small gripe about what otherwise was a good experience.